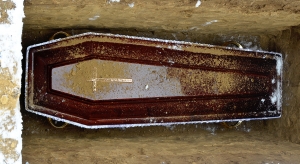 Welcome. On behalf of the family of the deceased I would like to thank you for being here. You have come to a funeral of sorts this Good Friday haven’t you? Well, that’s what they say I suppose.

Have you ever wondered what it would be like to go to your own funeral? Zhang Deyang was 66 years old when he decided to stage his own funeral. He arranged it himself, wondering how many would turn up given that he had never married and had no children. There was a particular reason for his concern—in Chinese culture, the dead are said to have needs, and their graves are supposed to be visited regularly to ensure those needs are met.

Would anyone come to your funeral? What would they say? I’m sure some teary eyed relative might say something good about you right? Have you ever been to a funeral where people didn’t say anything nice? Of course not. Ya gotta be nice at a funeral right? Also, everyone cries at a funeral. So what? They’re supposed to.

So don’t get a big head. Let’s be honest. If everyone were honest at your funeral would they give you a grand ol’ eulogy? We don’t do eulogies in our funeral services at my parish because we don’t let BS in the service. Telling great stories about your loved ones are fine at home with a couple of beers. In fact I encourage it!

If people really knew all you have said and done, what would they really say? If they knew all your thoughts, words, and secret desires that fly through your head throughout the day, what would they say? If they knew that you were pretty stingy with your money? Or how just the other day you walked by that kid being bullied in the hallway and pretended not to see? If they knew how you talk to your wife at home when no one is watching, or what you do on your computer when no one is watching?

What if God were to speak at your funeral service?

No one has ever died with dignity except for one man, Jesus. And being Good Friday, it’s His funeral service isn’t it? Yet what kind of death did Jesus get? It certainly wasn’t dignified. At Jesus’ funeral service they mocked Him. They dressed Him up as a king and spat on Him. They scourged Him 40 times. They stole His clothes. They gleefully nailed Him on a tree.

At Jesus’ funeral there was no eulogy praising Him. Peter denied even knowing Him! Judas betrayed Him! Others yelled out, “He saved others, let Him save Himself if he really is the Son of God!”

At Jesus’ funeral they threw Him on a cross. They treated him like a sinner! A thief. An enemy of the state! When He was dead, they stabbed Him in the side to make sure of it. They happily dragged His body off the cross and threw Him in a grave.

All of your sins. All of your foolishness. All of your shame. Everything that was done to Him, should have been done to you. But it wasn’t! He received it all in your place. All your lack of dignity was laid upon Him.

So from now on you do die with dignity. But not your dignity… Christ’s.

You already died in Christ. Paul says, “One who has died has been set free from sins!”

In the name of Jesus. Amen.