There Will Be Signs in the Sun and the Moon

I love fall. One reason is the end of the hot and humid weather. The other is it is the time of the year the church has designated to remind us that we are indeed in the last days awaiting Christ’s Second Advent (i.e. coming). The sermons during this time lead us to the celebration of the Reformation and the final anticipation of the second coming of Christ and our redemption.

The picture is this—as in the season of fall things are dying and we are entering the dead cold of winter, we know the new life of spring is coming—so, too, as things look increasingly gloomy and hopeless in this life, the return of the King is near and with Him our redemption. Thus, Christians should at all times and places hope for the return of Christ—our redemption from this sinful nature and the making of all things new. However, errors about “end-times” and secular ideas about an “apocalyptic dooms day” paint a false picture and rob us of true comfort.

The Christian faith is the reality that because of Christ’s suffering for us, our sins are forgiven and eternal life is certain. The suffering and evil in this life—including our own—will finally cease at Christ’s return. Upon His return there will be no more sin, death, or tears. However, faith is continually challenged by what we see and experience in life around us, and that Christ has yet to return. We are in good company when we are concerned by this. The church in the Old Testament wrestled with it crying out, “How long, O Lord, will I call for help, and You will not hear? I cry out to You, “Violence!” Yet You do not save.” (Hab 1:2).

The disciples asked Jesus, “What will be the sign of your coming and of the end of the age?” (Matt 24). It was the struggle for the early church with unbelievers vexing them with taunting questions like, “Where is the promise of His coming? For ever since the fathers fell asleep, all continues just as it was from the beginning of creation.” (2 Peter 3:4). Even the saints in heaven cry out now, “How long, O Lord, holy and true, dost Thou not judge and avenge our blood on them that dwell on the earth?” (Rev 6:10).

The challenge to faith is severe and unprecedented in our time. Previously the longest period of time without a Word or overt action from God was in the Old Testament around 400+ years. How much greater it has been and continues to be for the church today, with nearly 2000 years and counting having passed since Christ’s last advent. This amount of time and its continuation becomes increasingly a great cross for us to suffer and bear in which God seems absent. Yet in every time of apparent absence to our observations and experiences, God does not leave us bereft of constant signs of His promise in the things we see and experience.

When Abraham was given the promise of the Redeemer to come through his lineage and with Him a great nation, he never saw its fruition. Yet God gave him constant concrete signs to which He fixed His promise. To Abraham it seemed like the opposite of the promise of a great nation. So the Lord took Abraham out at night and told him to look up at the heavens and try to count the stars. He promised Abraham as innumerable as the stars in heaven are, so would his descendants be. Every clear night Abraham could gaze up at the stars, recall, meditate and savor the promise God attached to ‘this sign’ especially when things looked contrary to the promise. This sign is still in force—think about that on a starry night the next time it seems as if the Church is shrinking or vanishing!

In our time Christ has not left us bereft of unbroken signs of His promised return.

In the Gospels the disciples ask Jesus what will be the sign of His return and the coming of the kingdom. These are fairly well known passages. Jesus outlines a number of signs such as the sun, moon and stars darkening, wars and rumors of wars, etc. Most today think the kinds of signs meant are extraordinary, spectacular and miraculous events in nature—as if the sun would go out extraordinarily like a light bulb—while the predictably normal events like eclipses and earthquakes are “only phenomena of nature”.

Martin Luther points out the signs Christ speaks of are, by and large, the very mundane, predictable and ordinary eclipses in the sun, moon and stars that we experience naturally. Like Abraham, God has attached His promises to ordinary signs so that our faith would stay fixed to the promise and not the sign’s splendor or be deterred by the phenomena’s pedestrian appearance. 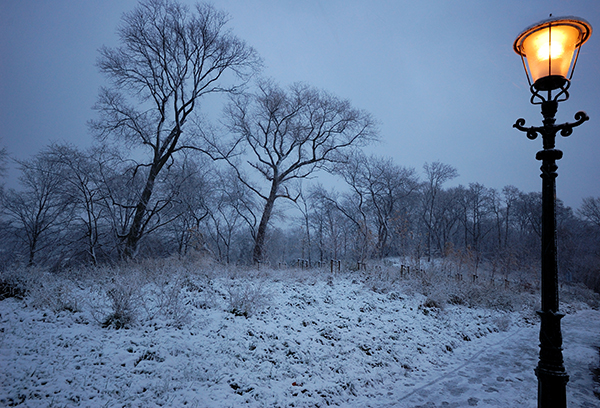 Creation and redemption is the real course of all events in nature and history. The cosmos in Genesis was set in place for the very purpose of being “signs and seasons” (Gen 1:14). For example we learn, correctly, the rainbow is a predictable phenomenon of nature. Under certain conditions light is refracted by rain into separate frequencies and we see the seven colors of the rainbow. We can reproduce this with a prism. The phenomenon has existed since the creation of the world. It predated Noah. However, after the great flood God took the rainbow and attached to it His promise that by water God would never again destroy the earth (Gen 9:11). Now God baptizes with water to bestow His saving Name (Matt 28:19) and save the baptized (1 Peter 3:21).

Thus, God takes normal created things and events and joins His promises to them. In and of themselves they are “just the created things and phenomena we see”, but when God says, “to this I bind My Word”, they take on significance beyond their common value.

Abraham was shown the stars as a sign of the innumerable saints of the Christian congregation. God did not give him an esoteric promise but a promise attached to a concrete reality he could see every night. Jesus also makes known to us signs of His return and our redemption. When Christ says there will be signs like the eclipses of the sun, moon and stars, earthquakes and famines in various places, etc.—these are the continuous publicity of His promises to us, and not apathetic phenomena of a godless reality careening about on its own.

These signs to unbelievers are meant as terrifying warnings so they will be turned from their unbelief to trust in Christ. However, because they don’t trust Christ’s promise and they see the commonplace nature of them—they think little of them (i.e. despise them). These same signs to believers are meant to be ever-present signs that “our redemption is near at hand”. Luther points out this should be of great comfort to Christians as he likens us to prisoners in captivity behind enemy lines. These signs are our King’s army waging the incoming invasion force to free us. We hear the approaching yet distant rumble of the great guns of heaven. Just like the signs presented Israel during their captivity in Egypt. To Egypt they were impending doom if they did not repent—they scoffed as well—but to Israel deliverance approaches!

The Christian can assuredly know that these otherwise fear-provoking and disastrous signs are to us signs of hope and not our impending destruction. We have already received the revelation (i.e. apocalypse) of our definite eternal status before God, “but now a righteousness from God apart from the law has been revealed” (Rom 3:21). In our baptism we have already received the apocalypse (i.e. revelation) that destruction is not our destiny:

“he saved us, not because of works done by us in righteousness, but according to his own mercy, by the washing [i.e. baptism] of regeneration and renewal of the Holy Spirit, whom he poured out on us richly through Jesus Christ our Savior, so that being justified by his grace we might become heirs according to the hope of eternal life. The promise is trustworthy” (Titus 3:5-8).

So, the next time you see the stars at night, an eclipse, hear of an earthquake, war or rumor of war in the news—‘lift up your hearts’ as it heralds the return of our King and in the train of His robe our redemption and not our destruction.