The Reality of Sin, Death, and Forgiveness

How do you speak to our modern society that no longer has a sense of our guilt and sin? How do you even speak of sin in a world in which the Word of God no longer carries authority and the subsequent effect becomes that moral and ethical issues are considered evolving, ambiguous, or relative?

When we explain away God’s Word, we jettison the reality of our ominous diagnosis in the “Thou shall/shall nots” of the law, and with it the sweet cure in the, “This is My body/blood” of the Gospel.

Today we explain away sin altogether by saying there is no sin, rather all things are normal variations of life. If it is natural, then death cannot be the “wages of sin”, but “a part of life”. This is the ultimate meaningless contradiction that only madness can believe.

We eliminate sin by ignoring God’s Word, specifically the law which informs us of our dire situation, by pretending sin is legitimate and death is within the “circle of life”. For if death is sin’s consequence and not “a part of life”, then our whole house of cards falls. However, unlike the idea of sin, we cannot so easily wipe away the concrete reality of sin’s consequence, our dying, by altering our perception. It is simply so evident, but that doesn’t stop our attempts.

We try to cover up the fact that we are born in a dying state of existence, dreaming how we can evade health issues with the right pill, exercise or food. If we can modify some behavior seemingly linked to the cause of our demise, then we might evade it. We pretend that the average age of mortality is too far out for me to worry. We attempt to cover up the inevitable horror of our demise with trifling funeral services in which death is spoken of as “part of life”. The list goes on endlessly. You name it, there is a physical, psychological or spiritual crack-pipe for every tangible indication of sin’s result… death. Yet, like all illusions it does not avoid, let alone change, reality.

The original sin’s consequence is so enormous that there is no evidence of innocence whatsoever, not even in babies. That last sentence is as horrifying for me to write as it is for you to read. Yet the awful reality of sin’s guilt before God is demonstrated in front of our faces intensely when we hear of or experience the gut-wrenching tragedy of a still borne baby or a child’s fatality. We think them relatively innocent, so we start the spin machine as to why? Why?! Because the horror is lurking behind the real answer: if this is true of them, then what of us adults!

Every backache, pain, and failure of our aging bodies from birth is not “natural”, but the minute-by-minute march we are on toward our final execution due to the fall of man. That we are on this “green mile” walk is proof of sin’s repercussion. No one escapes. Many once young beautiful lovers are nothing more than desiccated skin and bones. Athletic heroes become arthritic as their hearts, organs, and once great strength gradually fail them. I’ve flown across this country many times and the most universal testament to man visible from the air in every city is not the buildings of metropolises, but necropolises of graveyards. 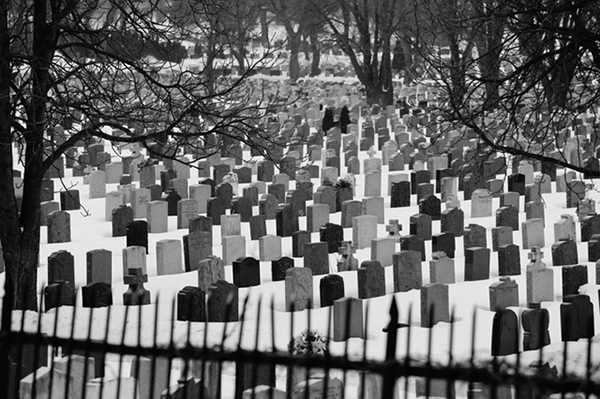 Our ruin lashes out from every direction and the thin veneer of our denial deceives us. We are born dying and, worse, everything in creation relentlessly seeks to execute us. A reality television show we used to watch called “Naked and Afraid” interestingly depicts the issue. The basic premise is two “survivalists”, a male and a female, are dropped into the wilderness naked and they have 21 days to get to an extraction point. If they do, they “survived” and “beat death”. It’s absurd in the grand point it misses.

The contestants who manage to survive cheer for themselves at the end because “they did it” after 21 days. However, as the observer of the show may note they are skeletal, and given 5 more days without intervention by the camera crew they’d be dead. But the most interesting part of the show is not that. Rather, from the very moment they are dropped off naked outside of the protections of society’s façade the entire creation continuously seeks to put them to death. Whether the sun’s radiation blistering their bare skin, the thirst that starts within hours, the elements, insects, parasites, animals, temperatures or the soon-to-come starvation – the entire creation immediately hunts them down. The smokescreen fails as the on-going reality of our dying reveals itself. As Luther said of sin’s guilt, “we are even afraid of the rustling of a leaf” (Lev 26:36).

There, concretely, is God’s curse on our fallen race: “On the day that you eat of it, DYING you shall SURELY DIE.” (Gen 2:17) The proof is not just that we will die, but we are dying. We are dying this very instant!

If the magnitude of sin’s guilt has not “struck”, think about this: if there is no damnation due to sin, what is Christ doing on the cross? Why did Jesus in terror sweat drops of blood in prayer before His crucifixion? Why did God’s Son cry out, “My God, My God WHY have you forsaken Me?” What horrified God on the cross? Here in the solution to our sin, we see our sin rightly in its entire dreadfulness.

Why, then, do we avoid God’s forgiveness? Why do so many unbelievers avoid or believers leave their baptism? Why do the churched infrequent the sacrament? Worse, why do pastors explain it away like unbelievers do the law?

Because of our self induced trance, the consequence of the fall seems to not be at hand, despite its ever present perceptibility. So we feel little or no need. However, once the fear of sin’s guilt before a holy God strikes us, then Jesus Christ and His words of absolution are the only way to life. “Be baptized for the forgiveness of your sins”, “Take, eat and drink, this is My body and blood given and shed for you for the forgiveness of sins.” This is God for you!

“God does not save those who are only imaginary sinners. Be a sinner, and let your sins be strong, but let your trust in Christ be stronger, and rejoice in Christ who is the victor over sin, death and the world.”
– Martin Luther, in a letter to Melanchthon, 1521