The Law of Christ 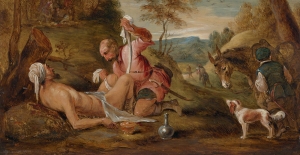 What’s more human than running head-long into sin? Selfishness, self-seeking, and a “me-first” attitude doesn’t attack us suddenly like a migraine. There’s nothing more human than selfishness. Self-deception and self-destruction are our birthright. And, as odd as it may seem, this knowledge can be a great comfort to us and can save our life, so long as God sends us a preacher.

But, of course, it’s human nature to look at someone who’s fallen into sin and point a finger at him, and say, “You’re disgusting! Clean yourself up, repent, and get yourself back on the right path! What kind of a Christian are you, to let this happen to you?!” Instead of getting down in the ditch with him to carry him out, even carrying him in such a way that, like our Lord Jesus, we love and serve him by making his sin our own, we accuse, condemn, and make a loud display of our rightness in comparison to his wrongness. Hardly anyone thinks: “This man fell into sin, and I may fall into worse sin.” But, as Martin Luther said, ‘if we who are always so eager to condemn others would investigate ourselves we would find that the sins of others are slivers in comparison to our own [log].’

It’s difficult enough for us to bear anothers’ burdens, but carry another person’s sin for him? Why would we do that? We’ve got enough to do and worry about each day without risking everything just to help someone entangled in sin. The wrong choice at the wrong time with the wrong person and everything we’ve worked so hard to get can be ripped away from us. We’re always one bad decision away from losing everything. Love and serve our neighbor by getting down in the ditch with him, take him upon our shoulders, and carry him out? What will people think when they see me arm in arm with such a disreputable character? Why risk so much for someone who’s probably just getting what he deserves?

When we ignore this historical fact we demonstrate that we know nothing of the Law or Christ’s work for us. And, as Martin Luther said in his 1535 Galatians lectures:

“Love, according to Paul, ‘believeth all things, hopeth all things, endureth all things.’ This commandment is not meant for those who deny Christ; neither is it meant for those who continue to live in sin. Only those who are willing to hear the Word of God and then inadvertently fall into sin to their own great sorrow and regret, carry the burdens which the Apostle encourages us to bear. Let us not be hard on them. If Christ did not punish them, what right have we to do it?”

Even this, as inspiring as it may sound to us, is easily disregarded because Jesus’ teaching, or Paul’s admonition, or Luther’s commentary doesn’t jive with our need to make everything about “me.”

We hate people who seem weaker than us, especially other Christians who fall into sin. We demand everybody live and speak like us. Unless we do it ourselves, what others do that we disagree with must be wrong. When other Christians don’t do what we say and adapt themselves to our beliefs we get angry and condemn them as in-Christian, ungodly, unworthy of our attention and help. This comes naturally to us since we believe we’re a “somebody” and the one who falls into sins that offend us are a “nobody.”

This perspective isn’t unique to any one person or group or denomination or religion. It’s nothing other than self-deception. It’s ordinary, everyday sin. There’s no godly wisdom or holiness in this attitude. We who identify as Christian are just demonstrating that we don’t understand Christ Jesus’ work for us or His Law.

When we insist things be done our way—as if there were any other way—we not only refuse to carry the burdens of our neighbor, we hurt our neighbor and tempt him to fall into worse sin. Then, when we see that “he’s gone from bad to worse” we grow to hate him—and he’d also grown to hate us with as much or more intensity—then we run head-long into sin by jumping into the opposite ditch to escape his sin! Then no one is comforted by the Good News that Jesus Christ already took the sin of the world upon Himself at Golgotha.

On the other hand, when we live in the comfort and freedom of the Law of Christ, when we see our neighbor crushed by sin, overtaken by selfishness and a self-destructive attitude, we can go to him in Love, comfort him with the knowledge that Jesus died for his sin, too, and carry him out of the ditch into which he’s fallen.

Then, when he’s clear of it, he can look back and see for himself. It was worse than he could have ever imagined. He wasn’t just overcome by sin. He wasn’t just wounded and unable to claw his way out of the ditch. He was dead. He was dead in sin and the Love of Christ found him and made him alive again.

This, then, becomes his great comfort and consolation everyday and always: God sent a preacher, not only to announce the Good News of Jesus Christ to him, but when he was flat on his back, dead in sin, the Law of Christ came, picked him up, carried him out, and loved him into a new life. A new life of comfort and freedom in the midst of selfishness and self-seeking. A life lived entirely in Christ’s love that—he now knows—will never leave or forsake him.