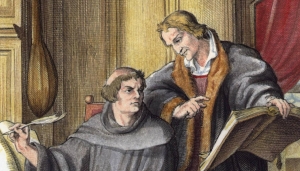 Luther Under the Ban Melanchthon Hard at Work

In 1521—the same year Melanchthon married his wife—at the Diet of Worms, Martin Luther was convicted of heresy and placed under a Papal bull and an imperial ban. The ban meant that he was an outlaw and could be killed or imprisoned on sight. It was only the grace and quick thinking of his elector, Fredrick the Wise, that saved Luther’s bacon. Elector Fredrick whisked Luther off to the Wartburg castle for safe keeping. Yet, while Dr. Luther was contending with the Papal bull against him, confessing the Christian faith at Worms, and writing sermons for preaching in the Castle Church and elsewhere, Melanchthon was at work developing the first Lutheran “system” of theology. This work was destined to exert a powerful influence on the Lutheran Reformation and marks an epoch in the history of Christian theology. The work in question was entitled the Loci Communes Theologici, or Common Topics of Theology.

Earlier this month I taught a class on Philip Melanchthon at St. John’s Lutheran Church in Frasier, Michigan. At the […]
May 24, 2017 by Dr. Scott Keith
Tags: Dr. Scott Keith rediscovery of the Gospel Reformation reformers
Read more
« Previous Page 2 of 2 Next »
© 2020 1517 Shop. Theme by Clean Themes. Powered by Shopify