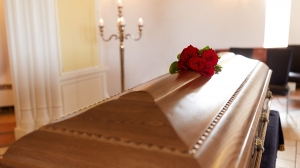 Funeral homes specialize in doing everything necessary to whitewash the very basis of their existence. They pretty up the corpse to make it appear as non-dead as possible. The architecture is neutral. The building could just as easily pass for First State Bank or the Law Firm of Douglas McSuehappy. Everything is roses and elevator music and men in nice suits directing us to our comfortable seats. Nothing about it says, “This edifice houses dead people.”

The funeral home could very well be the unofficial temple of American religion—a civic religion that denies death, naturalizes it, or quietly rolls over and accepts it. They exist to ease our discomfort, soothe our sorrow, help us, and coax us to believe that this “event” is just Mother Nature’s way of singing our swan song. Just as we pass most of our lives denying the reality of our own deaths, funeral homes assist us to makeup over the demise of our loved ones.

When Jesus’s friend, Lazarus, died, our Lord did not walk to the grave, force a smile, and say, “Brothers and sisters, we are gathered here to celebrate our brother, who has entered the next part of the great circle of life.”

Hell, no. Jesus wept. Each tear an boiling ocean of anger against the enemy. Then he hauled back and kicked death in the teeth.

“It is not the immorality or the crimes of man that reveal him as a fallen being,” Alexander Schmemann writes, “it is his ‘positive ideal’—religious or secular—and his satisfaction with this ideal,” (For the Life of the World). And what is the modern person’s “positive ideal” about death? That it’s natural. Normal. Part of life itself. Regrettable in the young but expected in the elderly. It is to be “explained.” We are “helped” to accept it, to deny the horror of it. In other words, death is just one more item in a Life List that includes weaning, puberty, adulting, and retiring.

But Jesus comes along and strips all these lies dressed in the drag of truth. Death is never natural. Death is abnormal. Death is not human. Death is the enemy. Far from an ideal, it is the anti-ideal.

Death is no more natural than child molestation is natural. It is a twisted, abhorrent, invading evil that has poisoned our world.

And that’s why Jesus kicks it in the teeth. That’s why He weeps. Because as a man He feels, down deep in His very bones, what the enemy has done. And He will stop at nothing to stomp this foe out of existence. 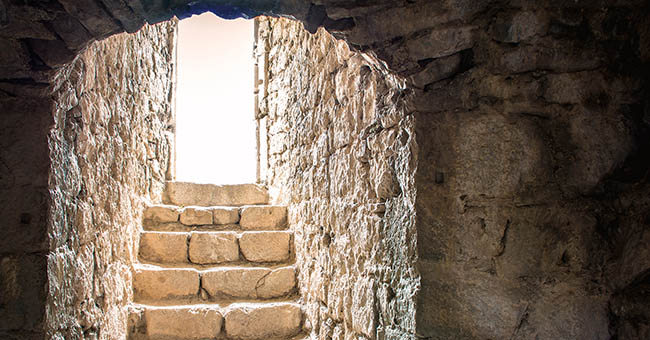 When Jesus marches out of the maw of death on Easter, He turns around and spits in the face of the grave. And we join Him. Mocking death, talking trash to the grave, laughing at its defeat.

A new world has come into being following the resurrection of the world’s Creator. A death-free, life-full world called the Kingdom of God. It is here, in this world while not of this world. It is a kingdom where life pervades everything. It is a kingdom we dove into through the liquid portal of baptism. That day we died to death because we were Eastered with Jesus. We were welcomed into His kingdom with open arms of crucifixion love.

Ours is not a funeral home faith that denies death; we acknowledge it. In the church, we call a thing what it is. Bob is dead. This is his corpse. But we don’t stop there. Bob is not dead because he died long ago in baptism. This corpse of his—God isn’t done with it yet. We’ll sow it, like a seed, in the ground until the rain and sunshine of Christ’s second coming have it spring forth brand new, vivacious and victorious, never to die again.

We don’t deny death. We mock it. We publicize its demise. And we proclaim, in this dead world reeking of vanity, that there is another world, hidden here. It is the mysterious kingdom of the King who died and is alive again. The kingdom that is ours in that crucified God who is the resurrection and the life.

Chad’s new book, Night Driving: Notes from a Prodigal Soul, will be released in just three more weeks, on October 11. Pre-order your copy at Amazon.