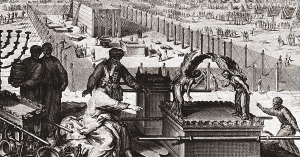 We all know husbands and wives who just don’t seem fit each other. The adrenaline junkie married to a knitter. The big game hunter wed to a vegan. How they ever met and fell in love is anyone’s guess. But there they are, Mr. and Mrs., wholly opposite yet happily married.

I don’t think it’s much different with another kind of union. Most people glance at Mr. Ritual and Ms. Grace and see Unequally Yoked scribbled all over that marriage. No way those two can pull it off. Bet they’re divorced within six months.

But here they are today, cutting the cake on their 3,462nd anniversary. Grace and ritual have been happily married since Israel was camped at Mt. Sinai.

We who fall within the Protestant camp of Christianity have longstanding issues with ritual. I get that. Ritual is often abused. Idolatrized. It can easily devolve into a hollow act of religious farce.

But it need not. In fact, when God got down to the nitty-gritty of setting up ways to cleanse, forgive, heal, and bless His OT people, He rooted His divine grace in rituals. Primarily three kinds: founding, maintaining, and restoring. And these three kinds of rituals continue to define how God gives us the Gospel today.

The first kind of ritual in the OT gets something off the ground. Or, more precisely, roots it to the ground—it anchors grace in a specific locale. Take, for instance, the founding ritual of the priesthood. Aaron and his sons underwent a 7-day ordination to become priests. Also, when the tabernacle was erected, there was a founding ritual for its dedication. That tent became God’s mobile home so He could travel in the caravan of His people. By His word, embedded within a ritual, God got things going.

It’s no different now. The founding ritual for followers of Christ is getting liquidated into their Lord. We stream into the tabernacle of His body on the waters of baptism. Everything changes. Something is founded, begun, within us. We become priests. We are changed from enemies of God into His children. In the sacred ritual of baptism, God anchors us to the specific locale of His grace: the body of His Son. And there we stay. Grace and ritual are happily married in the holy act of God baptizing us.

The second kind of OT ritual always kept God’s people on the receiving end of His blessings. They were maintained in holiness and righteousness. At the tabernacle, every morning and every evening, animals were sacrificed, prayers were offered, and Israel was cleansed. Unholiness was purged away. Sanctity was given. Similarly, throughout the year, at the festivals of Passover and Pentecost and Booths, God lavished His love and mercy upon Israel. He forgave their sins, put His name upon them, and enriched them with His word. 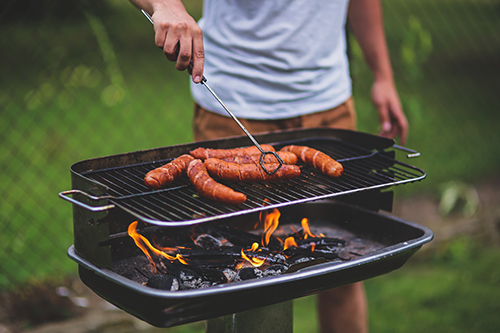 So it is today in the maintenance rituals of the kingdom of God. In the church, the Holy Spirit daily and richly forgives the sins of all believers. Like a dad at suppertime, He opens the church door and whistles for His kids to come and eat. And we do. We all elbow our way to the Father’s table. In a feast of joy, we dine on the Lamb slain from the foundation of the world. The wine of His love spills over our lips and into our bodies. He sanctifies us by filling us with the holy body and blood of the Messiah. As our mouths feast on Jesus the meal, our ears feast on Jesus the word. We are filled, head to toe, with God. Our wrongs are purged away. All our unrighteousness is trashed and the treasure of Christ’s righteousness covers us. God is at work to maintain us in His grace through these rituals of word and meal.

Coming Back to Grace: Rituals of Restoration

God gave the third kind of OT ritual to restore life and holiness when things had gone awry. There were times, for instance, when His people became unclean because of contact with a corpse, a bodily discharge, or a skin disease (read more about that here). They needed God to make them clean, to make them holy, to restore them so they could enter His tabernacle again. So He did. The most well-known ritual of restoration took place annually in the fall. It was Yom Kippur, the Day of Atonement. Throughout the year, intentional sins had been committed; the altar and tabernacle had become defiled; priests had messed up. Everything and everyone needed atonement, purging, and restoration. So animals were sacrificed and one goat—which we call the scapegoat—bore the iniquities and uncleanness of Israel into the wilderness. All was made right again by the merciful act of God in this ritual of restoration.

God still acts the same today. He stands as the father of the prodigal son, ready to run out to meet His wayward children, clasp them in His arms, weep on their necks, and throw a party to celebrate their return. He bids us come to Him, confess our sins, and receive the no-strings-attached forgiveness of Jesus Himself. He puts His word of absolution into the mouths of our pastors, as well as all our brothers and sisters in Christ. They speak His love into our broken hearts. We all give each other the fruits of the ultimate Day of Atonement, Good Friday, when the Lamb of God took away the sins of the world. He bore them, as our Scapegoat, into the wilderness of hell to drop them on the devil’s doorstep. Through the rituals of confession and forgiveness we are restored, declared righteous, and reassured of our place in the Father’s kingdom.

Three kinds of ritual, one kind of Gospel. That Gospel is the foundation of our faith, it keeps us in the faith, and it welcomes us home no matter how many times we stray. God has always, and will always, put His gifts into certain places and things and actions so that we might know exactly where to find Him.

And there He is, standing between Mr. Ritual and Ms. Grace, as the Father who knows how to give good gifts to His children.