Look Upon the Tree 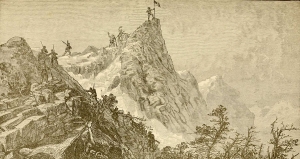 Here’s a dose of optimism for you. It comes from Henry David Thoreau writing beside Walden Pond when this nation was not yet 100 years-old:

If the moon looks larger here than in Europe, probably the sun looks larger also. If the heavens of America appear infinitely higher, and the stars brighter, I trust that these facts are symbolical of the height to which the philosophy and poetry and religion of her inhabitants may one day soar… I trust that we shall be more imaginative, that our thoughts will be clearer, fresher, and more ethereal… [1]

Such optimism and zeal is most often reserved for young people and young nations. Yet in the more than 150 years since Thoreau, we’ve sobered up. As a nation, we’ve aged and are showing the signs of it. In so many ways zeal and optimism have eroded into cynicism and pessimism.

Yet in truth, every age gives cause for both hopefulness and despair. We can even see this in Thoreau’s day. His words come to us from 1862, but even then not all was well in our young nation. Native peoples had already been massacred. The 250-year-old institution of slavery had yet to be abolished in the ‘New World.’ And the western expansion that was in large part responsible for his optimism was continually creating its own tragedies.

Take for instance John C. Frémont’s expedition of 1848. Having previously led three successful western expeditions, he now resolutely set his face west along the 38th parallel on his own self-funded expedition. The goal was to pioneer a new railroad route between St. Louis and San Francisco. All went predictably smooth for him and his band until in early December they hit the Rocky Mountains west of today’s Pueblo, CO. Their party of 35 men, nearly 100 mules, over 130 bushels of milled corn for the beasts, provisions for a small army, a sextant, a telescope, and two bulky barometers, clumsily made it over the Sangre De Christo Mountains and down the giant sand-dunes on their western slopes. Then they proceeded straight up into the teeth of the San Juan mountains, and a ferocious blizzard that wouldn’t let up for more than a month.

And so from December 4, 1848 to February 14, 1849 their foolishness was met with great hardship, little progress, and no easy escape. In many places the snowpack was over 25 feet deep. Their string of self-named camps tells the story of the emotional and physical toll; ‘Camp Hope,’ ‘Camp Christmas,’ and ‘Camp Dismal.’ Ultimately nearly all equipment would be lost, 10 men would perish, and every beast would die.

From his optimistic perch, Thoreau thought that the answers would be found in the heavenly places—the stars, the sun, poetry, and philosophy—the path of mankind proceeding ever onward and upward. Yet Frémont’s folly of grand ambition at ground-level was only one of many sober reminders that when we think we are aiming for the stars and feats of glory we are most often simply turned in on ourselves, calling wise what is foolish, calling good those things that actually bring death.

In 1968 a Colorado historian by the name of Patricia Joy Richmond set out to piece together the exact route of Frémont’s misadventure. For more than 100-years the history books had talked in generalities of their tortuous route, but the actual route had never been determined. Summer-after-summer she hiked mile-after-mile, yet the clues evaded even her until finally in 1990 she looked up and found the answer upon a tree. For there above her, she found a tree that had long-ago been cut-off some 25-30 feet above the ground.  And there were others still, marking the expedition’s camps. With a snowpack of over 25 feet deep, Frémont and his men camped at snow-level and not ground level. And there at snow-level—25 feet up—Frémont and his men cut down those trees for their live-giving firewood.[2]

Thoreau believed that the answers were to be found—then and always—in mankind ascending into ever higher places. But this is overly-optimistic. Yet, who can blame him, for life at ground level so often offers a pessimism fueled by hardship, pain and death, just as the Frémont expedition found out. 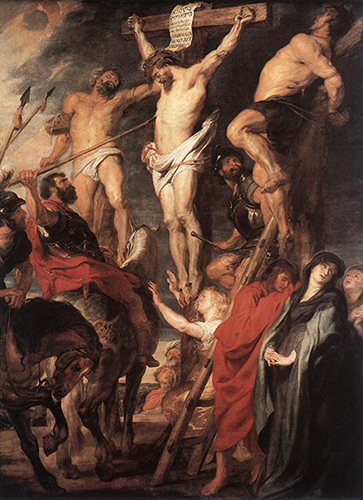 Yet for us, as with Ms. Richmond, the answer is revealed upon a tree. For on a tree we are given God’s son, Jesus, cut down, and hanging for us—a life-giving gift.

Jesus had given up the heights of heaven and come down to us (Phil 2:5-6). He had, and has, taken to Himself our human flesh at the ground level of conception, womb, manger, family, and neighbor (Matt 1:18-25). He set His face resolutely toward Jerusalem (Luke 9:51-53). And He was crucified up on that tree—hanging between heaven and earth in order to effect the great and gracious exchange—His holiness for our filthy rags, and our filthy rags for His holiness (Isaiah 64:6, 2 Cor 5:21).

And as if all of that were not enough, He is Risen and he speaks continually to us, “My peace be with you!”

Every age will vacillate between the heights of unfounded optimism and the depths of despairing pessimism. Yet God gives to every age Christ crucified, and Christ risen—the only hope, a certain and secured hope, for all people.

Theologian Lesslie Newbigin was once asked, “Are you an optimist or a pessimist?” He responded, “I’m neither an optimist nor a pessimist. Jesus Christ is risen from the dead!” To this we say, Amen. May the Spirit of God ever keep our eyes on Jesus crucified upon the tree, the same Jesus Who is risen from the grave—living, present, and coming again.