LGBTQ and the Gospel 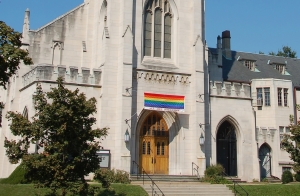 “The uncomfortableness of being me never leaves me all day long. I’m not doing this to be interesting. I’m doing this to live … if I was lying on my deathbed and I had kept this secret and never ever did anything about it, I would be lying there saying, ‘You just blew your entire life. You never dealt with yourself.’ And I don’t want that to happen.”
— Caitlyn Jenner [2]

In the recent controversy surrounding Bruce’s transformation to Caitlyn, along with the SCOTUS decision on gay marriage, I am reminded of how all the talk regarding the LGBTQ debates often times hinges on one particular argument, and that is that if my nature is to be LGBTQ then it is okay for me to be LGBTQ and I need to embrace that. The problem with this argument, as many have pointed out, is that it this is an echo of the logical fallacy known as the naturalistic fallacy. [3] But just because you think or feel a certain way, about your nature, does not mean that you should land the plane on those thoughts or feelings. Anyone could rationalize their sinful decisions or behaviors based upon this fallacious argument. For example I could say, “Since I naturally lust after other women, I ought to indulge in that lustful behavior, because it is a part of who I am.” There is no way that my wife would go for that argument and rightfully so.

Theologically we agree that people will seek to be a certain way based upon their nature. In fact we would go so far as to say there is no other way to be, yet what your nature tells you to be. But, we understand that the “nature” we are talking about here is the sinful nature that is part and parcel to every human being. Ever since Adam and Eve chose a direction opposite the one that God set up for them the human race has been damned. Adam and Eve’s decision to rebel against God deals with more than just our morality. Jesus argues against this idea when he states that it is out of the heart whereby we do sinful things. (Matt 15:19) In other words darkness begets darkness. Sin infiltrates our very DNA. So it is not problematic, from this perspective, when homosexuals believe they were born to be homosexuals, or transgender folk believe they were born to be the opposite gender. If sin corrupts our whole nature then we are going to follow tendencies that we believe are “natural” to us.

While we seek to follow our nature in doing the things we want to do, we also have this law inside of us that tells us otherwise. (Rom 2:14-15) And yet why does that law seem not to always work in curbing our actions? The reason is due to our Old Adams. Our Old Adams will corrupt the law inside of us. They will twist and turn that law into something else. Here is why we need the revealed Law as Luther argued. Without the Law from God’s Word we would have no clue that some of the actions we indulge in are bad. In fact we would be clueless to the fact that our very natures are corrupt to the core. Just listen to how people talk today: “I am not perfect, but I am certainly not evil.” Or “At least I am not as bad as Adolph Hitler, Osama bin Laden, etc.” Well God states otherwise in fact He tells us that we are all children of wrath. (Eph 2:3)

As Paul tells us in Romans 3:10 “none is righteous, no, not one”. We can rationalize all day and night that we should be following our natures when in reality all we are doing is rationalizing our sinfulness.

Thank God then that He sent Christ into the world for us, God in the image of sinful humanity who became our sin for us. (2 Cor. 5:21) What a testimony to the love of God that he would condescend to enter our darkness, to reside in our muck, to take on our own fecal natures. We then see how this is reflected in Jesus’ own prayer from the cross when he cries out “My God, my God, why have you forsaken me?” (Matt 27:46) In quoting from Psalm 22 Jesus is expressing how the internalized darkness of humanity, which he has taken on, drives the Father to turn away from the Son. In becoming a curse we see God turning away from God. Christ died for everyone. His shed blood covers all sin whether it relates to LGBTQ, adultery, fornication, pornography, lust, and the like.

In baptism then we are connected to the crucifixion and resurrection of Jesus. Our Old Adams are nailed to the cross and our new creatures rise up from the watery tombs. Yet, while our baptisms are a onetime event the effects of baptism are experienced daily. Luther mentions that we should daily remember our baptisms by making the sign of the cross, as well as engage in a daily drowning of the Old Adam as he attempts to arise as the undead from his darkened abyss. The daily drowning, as Luther remarked, is done through the confession of our sins. A confession in which we tell back to God what he has already confronted us with in his revealed Law. All of this echoes Jesus’ words regarding the need to walk the cruciform life which means a daily denial of our selves. (Luke 9:23)

Here then is where Christianity bumps up against our culture and our old creatures. Christianity tells us that we need to fight against our “natural” selves, and deny those Old Adams that whisper to us to go ahead and indulge in whatever sin we wrestle with because we are just acting out of our “nature.” So in light of any sexual sin this means we need to deny our desires to delve back into the sewage pit of that sinfulness. Is it hard work? You bet it is! Sin, Satan, and the world are going to go full court press on us in our denial. And let’s admit it sometimes that trio of enemies is going to win in the daily fight, which is why we need to flee again to the cross. And even when that trio gets frustrated in the fight we still need to flee to the cross lest we get big headed about our own ability to withstand the siege from these foes.

Lest I get accused for being biased against the LGBTQ crowd as a heterosexual (even though I have lumped all kinds of sexual sins in together, which includes putting myself in the same boat) I want to conclude with a quote from, Wesley Hill, who is a committed celibate gay Christian who also openly and honestly admits to the daily fight he has with his sinful nature. He writes:

Why do I choose to abstain…? In the end, what keeps me on the path…is not so much individual proof texts from Scripture or the sheer weight of the church’s traditional teaching against homosexual practice. Instead, it is, I think, those texts and traditions and teachings as I see them from within the true story of what God has done in Christ Jesus – and the whole perspective on life and the world that flows from that story, as expressed definitely in Scripture. [4]

May the Gospel story always shape us as we live out the struggles in our day to day life until Christ comes in His fullness again.