Jesu, Joy of the Forsaken 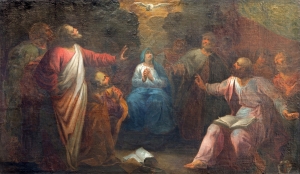 When Christianity turns from being all about Jesus and instead becomes all about ordering, numbering, controlling, and putting boundaries around people, it becomes just another religion. It becomes the same religion that crucified Savior Jesus. Christianity becomes a religion of guilt that emphasizes the unknowable divinity of Jesus over against his humanity. What happens then is that Christians argue about who’s in charge of who, who’s going to run things, who is the authority and who are the leaders that tell us on behalf of Jesus what to do next.

This sets up a way of teaching and speaking and behaving that is no different, in the end, than the way the Jewish religious leaders ran things in first century Palestine. Why? If you want to control people, you control them with guilt and fear. Then the priests come with their reverent smiles and ask, “Are you guilty?” “Are you guilty enough?” “Have you gone to confession this week?” “Have you told the priest your deepest, darkest, damnable sins?” “Have you said your three Hail Marys yet?” “What’s that? You murdered someone this week? Well, that means you’d better add on four Our Fathers!” “You know, maybe the problem is that you’re a drunken fool who beats his wife because he doesn’t fear God and go to church enough. So, tell you what, go to church and you’ll clean up your act!”

Guilt and fear are significant mechanisms of control and when Christianity becomes just another religion the church becomes the mechanism for how each Christian gets to heaven. Then from Sunday School to the pulpit and into every bible study the pastor will focus on the questions: “Are you guilty?” “Do you feel guilty enough?” “Are you repentant?” “Have you shown God how repentant you are for your sins?” “Are you sincerely sorry?” “Are you truly, sincerely, apologetically sorry?” And on and on it goes swinging wildly between the fear of yesterday’s failures and the urgency of tomorrow’s foreboding.

The other way the Church acts as the mechanism for how each Christian gets to heaven is when it teaches that Christians must imitate Jesus’ example, which may sound good at first blush but begins to stink when exposed to further scrutiny. It is impossible, since Jesus is true God and true man who gave His life for us. He was our substitute. He was forsaken for us.

Why was Jesus forsaken? He had no other choice. He gave up all godly authority and power to be our substitute, to die in our place, as St. Paul explains to the Philippians. Jesus suffered just as we suffer without a hint of advantage held aside for Himself. He died just as we die with no fooling around. He wasn’t mostly dead. He wasn’t 99% dead. He was stone cold dead. He suffered hell for our sake because he is a man and he is our stand-in, our substitute. He suffered, and was executed, and died, and descended into hell, and was raised from the dead by the Father. He couldn’t raise Himself from the dead, after all, because He was dead!

Jesus went through it all so that He can be the joy of the forsaken. The joy of the alcoholic and drug addict. The joy of those who are confused and disbelieve, who are lost, and those standing on the outside looking in, asking, “How can I get forgiveness, life, and salvation, too?” 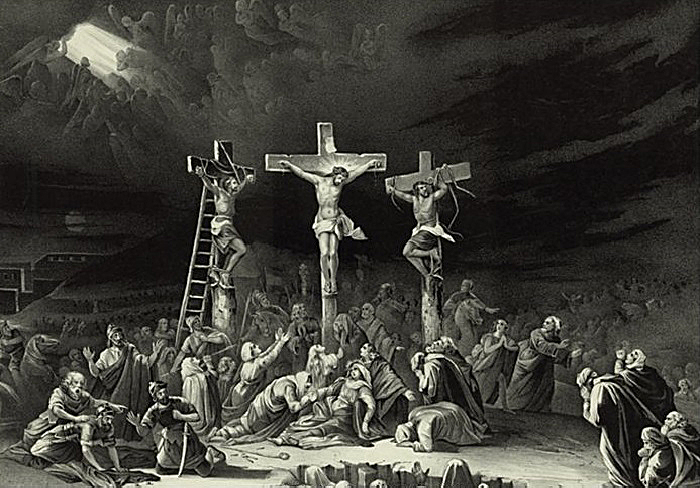 But, when Christianity becomes just another religion it throws that all out the window. Then the church doesn’t care about the forsaken at all. It doesn’t care about those who stand on the outside and look in. All it cares about is power, and influence, and control through fear and guilt, and emphasizing the example of Jesus, which is total and utter nonsense to people who are crushed by guilt and fear over lives gone all wrong. Then, in the end, the very reason that Jesus died, that the Word was born in the flesh, that He suffered and died and descended into hell for our sake is washed away. It’s completely thrown off the board.

Then those who are welcomed into the church aren’t those who are forsaken, or are seeking, or who struggle, or are dead—whether dead broke, or dead drunk, or just plain dead in sin. Instead, the church becomes just another place for good, upstanding insiders who gather weekly to look at each other and judge each other in order to measure how close they are to God as opposed to everybody else.

This is why at Pentecost the crowds thought those who’d become overshadowed by the Holy Spirit were drunk. Everything they said sounded absurd. It was stupid to them because these people were saying that Jesus is not just a man who died, but God and man at the same time. This God became flesh like no other God before or since so that He could take our place in death, so we’d never have to question our relation to God again. He came close to us as our Emmanuel so we’d never have to ask “What God do we worship?” “What God are we talking about?”

On account of Jesus’ coming to us we know specifically who God is: this man Jesus Christ Who died and was raised from death for those who are forsaken, who struggle, who are afflicted, who are sick and in prison, and for the dead. Likewise, fear and guilt are drowned out by the Good News that Jesus is the joy of the forsaken. He doesn’t stand with insiders, he stands on the outside. Jesus moves the middle to show us, to prove to us who are hell bent on making Him into an unreachable ideal, that as much as we try to wind ourselves up into making Christianity just another religion, He has chosen to die for all of our sins so that everyone past, present, and future tense can hear the drunken Gospel, the absurd Gospel of Jesus Christ, that as much as we screw it up, as much as we can’t nail the faith thing, and we make a bloody mess of loving our neighbor, we’re never abandoned or forsaken because Jesus has died for the sin of the world, everyone without number, one time for all time.