How Bach became a Hit in Japan 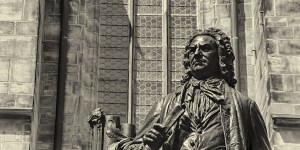 Forty years ago when there was still a Communist East Germany, I interviewed several boys from Leipzig’s Thomanerchor, the choir once led by Johann Sebastian Bach. Many of those children came from atheistic homes. “Is it possible to sing Bach without faith?” I asked them. “Probably not,” they replied, “but we do have faith. Bach has worked as a missionary among all of us.” During my many journeys to Japan I discovered that more than a quarter millennium after his death Bach is now playing a key role in evangelizing that country, one of the most secularized nations in the developed world.

When Bach died on July 28, 1750, after two botched eye operations performed by John Taylor, a quack from England, his last major work, The Art of the Fugue, remained incomplete. It culminates in a quadruple contrapunctus bearing his signature, for it is formed from the letters b-a-c-h (in German musical terminology b-natural is called “h”). Just as you might expect the final section of Fugue 19 to begin, the music stops eerily. The blind man no longer had the strength to pull together its various themes to a perfect ending. Instead he dictated to his son-in-law a powerful last chorale–Vor deinen Thron tret’ ich hiermit (Before thy throne I come herewith)—and then he departed.

The Art of the Fugue is perhaps Bach’s most abstract and intellectually challenging work. Yet its pristine grace led Arthur Peacocke, the English theologian and biologist, to aver that the Holy Spirit Himself had written it, using Bach’s hand. This quality of his music provides Christianity with a curious inroad to a group of people who in the past had resisted evangelization more effectively than any other: Japan’s elite.

Masashi Masuda, from Hokkaido, Japan’s northernmost island, told me how Glenn Gould’s interpretation of Bach’s Goldberg Variations had first aroused his interest in Christianity. “There was something about that music that prompted me to probe deeper and deeper into its spiritual origins,” he said. Masuda is now a Jesuit priest and a lecturer in Systematic Theology at Tokyo’s Sophia University. Yoshikazu Tokuzen, the former rector of Japan’s Lutheran seminary and president of his country’s National Christian Council (NCC), echoed Peacocke: “Bach is a vehicle of the Holy Spirit.” As evidence Tokuzen cited an astonishing statistic. Although less than 1 percent of the 127 million Japanese belong to a Christian denomination, another 8 to 10 percent sympathize with this “foreign” religion. Tokuzen explained: “Most of those sympathizers are part of the elite, and many have had their first contact with Christianity through the music of Johann Sebastian Bach.”

”I fit into this category,” said my interpreter Azusa, a twenty-five-year-old law student. She pulled a CD out of her handbag. It was a recording of Bach’s cantataVergnügte Ruh’, beliebte Seelenlust, whose lyrics explain that God’s real name is love. “This has taught me what these two words mean to Christians,” she explained, “and I like it so much that I play this record whenever I can.”

Azusa made it clear, though, that while she recognizes Christianity’s beauty as a phenomenon going far beyond cultural aesthetics, she is not yet a convert. In this she typifies perhaps millions of highly educated Japanese who resist taking the leap of faith—or admitting to it—although they are painfully aware of what Tokuzen calls the “spiritual void” into which their society has slipped.

Two-thirds of all Japanese profess no religion. However, of this vast majority, 70 percent deem religion important for society. “Yet Buddhism and Shintoism, Japan’s traditional faiths, have long lost their credibility,” said Martin Repp, a German Lutheran theologian who was the deputy director of the NCC’s Center for the Study of Japanese Religions in Kyoto. “Today their roles are only ceremonial, and most of their temples are mere tourist attractions. Churches could pick up the slack if they were not so self-absorbed, especially the mainline Protestant denominations, to which most Christians in Japan belong,” Repp continued. “Most wealthy congregations are only thinking of themselves and give little money to missions; meanwhile, international mission societies are curtailing their budgets for Japan.”

Kummi Tamai, a successful American-trained evangelical pastor, called most of his colleagues lazy evangelizers. He chided them for not providing a challenge to the young who, according to Repp, feel hopelessly alienated from their parents’ generation. “In their frenetic pursuit of production, speculation, and consumption,” Repp said, “the older Japanese have provided their offspring exclusively with materialistic values. But the youngsters are yearning for something more. The result is an enormous gap between the generations; they are no longer able to communicate with one another.”

The ensuing spiritual crisis manifests itself in many ways. No other country in the developed world keeps as many palm readers busy. None produces as much pornography; nearly half the world’s smut is made in Japan—and openly consumed in trains and subways. An average of 70 Japanese, including many teenagers, kill themselves every day; according to government figures, a total of 18,048 youngsters under the age of 18 took their own lives between 1972 and 2013. Opinion polls show that 60 percent of the population admit to being afraid every day. Most fear bringing shame on their families, teachers or superiors by failing at work or in school.

”What people need in this situation is hope in the Christian sense of the word, but hope is an alien idea here,” says the renowned organist Masaaki Suzuki, founder and conductor of the Bach Collegium Japan and a former organ student of Ton Koopman, one of the world’s leading Bach interpreters. He has been the driving force behind the “Bach boom” sweeping Japan during its current period of spiritual impoverishment. “Our language does not even have an appropriate word for hope,” Suzuki says. “We either use ibo, meaning desire, or nozomi, which describes something unattainable.” After every one of the Bach Collegium’s performances Suzuki is crowded on the podium by non“Christian members of the audience who wish to talk to him about topics that are normally taboo in Japanese society—death, for example. “And then they inevitably ask me to explain to them what ‘hope’ means to Christians.”

Like Georg Christoph Biller, Leipzig’s departing Thomaskantor and Bach’s sixteenth successor in that position, Suzuki sees himself as a missionary. “I am spreading Bach’s message, which is a biblical one,” he said, echoing the Swedish theologian and Lutheran archbishop Nathan Söderblom (1866-1931), who called Bach’s music “the fifth Gospel.” A member of the Reformed Church, Suzuki makes sure his musicians, mostly non-Christians, get that point. During rehearsals he teaches them Scripture. “It is impossible to say how many of my performers and listeners will ultimately become Christians,” Suzuki said. He believes, however, that Bach has already converted tens of thousands of Japanese to the Christian faith.

Suzuki assembled his Bach Collegium nearly 25 years ago. Since then, he estimates, “anywhere from one hundred to two hundred other Bach choirs have popped up around this country.” Suzuki is even responsible for introducing the German word Kantate (cantata) into the Japanese vocabulary; it is currently a highly fashionable term. Suzuki’s concerts are always sold out. Every Good Friday more than two thousand Bach enthusiasts pay hundreds of dollars each for a ticket to his ensemble’s performance of the St. Matthew Passion. “It is very moving to watch this enormous crowd follow the Japanese translation of the German lyrics word for word,” Professor Tokuzen said. “Where else in the world do you find non-Christians so engrossed in biblical texts?”

Japan’s Bach boom does, however, have one baffling aspect: how is it possible that melodies and rhythms from eighteenth-century Germany should please people of an entirely alien culture thousands of miles to the east? Tokyo musicologists have come up with an astonishing answer: Bach’s appeal to today’s Japanese is directly linked to a Spaniard’s first attempt to evangelize their ancestors 450 years ago.

In August 1549 the Spanish Jesuit Francis Xaviér (1506-1552) became the first Christian missionary to land in Japan. In the decades that followed, the Jesuit and Franciscan fathers baptized 20 percent of its population, including members of princely families. It soon became fashionable to promenade around Nagasaki carrying rosaries.

But in 1587 the shogun Hideyoshi expelled all missionaries, and a murderous persecution of all Christians followed. Believers were crucified, burned at the stake, tortured to death, or hanged upside-down over cesspools to intensify their suffering. Few Japanese were aware of this sinister aspect of their history until in 1999 the Tobu art gallery in Tokyo commemorated the 450th anniversary of Francis Xaviér’s arrival with a massive exhibition spread over three floors.

The enormous crowds filing through this show were horrified by the cruelties its images portrayed. But there was one thing they did not learn at the Tobu Gallery: Western music managed to survive the persecution. The Jesuits had introduced Gregorian chant to Japan and built organs from bamboo pipes. They trained Japanese children so well in handling the queen of instruments that in the 1560s three princely wunderkinder from Nippon were competent enough to be sent to Europe to play the organ before illustrious audiences, including one in the Vatican. By the time Christianity was totally outlawed in Japan in the early seventeenth century, elements of Gregorian chant had infiltrated Japan’s traditional folk music. That influence remained strong enough to help Johann Sebastian Bach’s music sweep across the island nation more than four centuries later.

** NOTE: An older version of this essay appeared in the periodical First Things and was posted in December of 2015 at League of Faithful Masks (A 1517 Legacy Project)