Have Yourself a Vulgar Little Christmas

Probably my favorite piece I’ve ever read about Christmas was G.K. Chesterton’s chapter from his book Heretics, “Christmas and the Aesthetes.” The main idea is that lots of people lamented that ancient paganism was dead, but the same people who profess that they would love an old pagan feast ignore Christmas, where the best of paganism has survived. You can read the whole thing here.

Anyway, Chesterton is good reproof for me. If I could I would repristinate all kinds of lost Christmas traditions. I have even successfully seen some of this done in a parish—for a year. People attended and enjoyed, but the events did not have staying power, whether a visit from St. Nicholas, or St. Lucia celebrations. No one person decides what constitutes a public holiday celebration.

That is not all bad news. What is funny is that even in its non-religious offerings, the culture allows me a liturgical regularity of Christmas joy. For the umpteenth time I have watched A Christmas Story with Peter Billingsley, and the zany screwball comedy (and early foodie movie) from 1945, Christmas in Connecticut, with Barbara Stanwyck. Both of these movies prove to be re-watchable—like the best Twilight Zone episodes on Thanksgiving—way past what I would expect. These wonderful things appear year after year because others want to see them. I just have to remember to DVR.

This reflects another piece of good news. Should I live long enough, some of the Advent hymns I have only recently discovered (e.g. “O Lord, How Shall I Meet You” which came to my attention last year. Listen here.) will wear their way into my soul as some others from Lutheran Worship did long ago.

One of my more recent “Christmas discoveries” was found by going through lists of best Christmas movies. I finally decided, a few years ago, to watch Meet Me in St. Louis. I had seen the trolley scene in various places and thought it was an inane song, and had no interest in the movie. But some article persuaded me to watch anyway. Probably by describing Judy Garland’s input on the “Have Yourself a Merry Little Christmas” song. (Learn about that here.) I put in the DVD. My dad said, “I’ve seen this movie lots of times” and got up out of his chair. Usually that was a sign of no confidence. He’s going upstairs to play Spider Solitaire. I said, “You don’t like it?” He said, “I’m getting a cup of coffee.” He came back and watched the whole thing. When it ended, he said, “That is a great movie.” (For those interested, his other strong positive reactions were to Charly, Little Big Man, The Fountainhead, Moulin Rouge, and lastly Hugo.) I had discovered that my dad, who really was not a re-watcher of many movies, had a hidden favorite that bore repeat viewing.

To wrap this up, I’ll give you Chesterton himself: 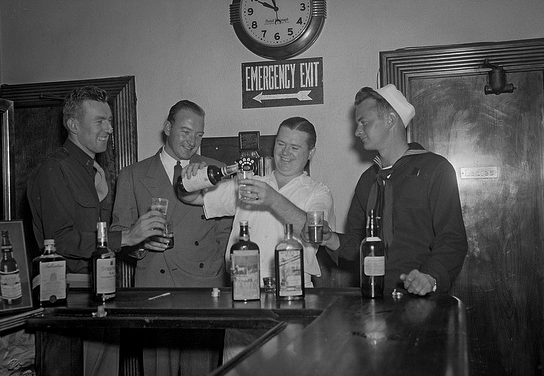 I’ll know we’ve had a revival of faith when I can find more screwball comedy on offer at the cinema. And I hope that after the revival, you find yourself inundated with more of what you imagine you’ve overindulged in this season, and a constitution that can handle it. (Until then, only do what you can handle.) So be a little vulgar this year. Watch that movie again. I double-DOG-dare ya!