God’s Not Angry At You

Recently, a young woman said to me, “I know I’ve disappointed God. I know I can never do anything for my family to make up for what I’ve done, and I would never expect God to forgive me for what I’ve done.” She had sunken into such despair about herself and her circumstances that it was virtually impossible for her to imagine a God who saw her differently than others saw her, or any differently than she saw herself. Add to this a congregation she felt disconnected from and pastors who had painted an image of God’s love for her that more closely resembled a business transaction than a bloodied Savior and it was little wonder she was in such a hopeless state.

But, what does God have to say to a miserable sinner like the young woman who was overwhelmed by what she had done? Likewise, can God’s love reach even to those whose actions have resulted in further hurt and harm being done to them by clergy and congregation? Can a sinner fearing God’s furious anger and judgment expect to hear her Lord’s promise, that: “I have loved you with an everlasting love; therefore I have continued my faithfulness to you” (Jeremiah 31:3)?

Yes, even a sinner who is crushed by the weight of her offenses, who feels in her bones the weight of judgment, shame, and doubt can expect to receive God’s good word, just as the Apostle writes:

“If God is for us, who can be against us? He who did not spare his own Son but gave him up for us all, how will he not also with him graciously give us all things? Who shall bring any charge against God’s elect? It is God who justifies. Who is to condemn? Christ Jesus is the one who died—more than that, who was raised—who is at the right hand of God, who indeed is interceding for us. Who shall separate us from the love of Christ? Shall tribulation, or distress, or persecution, or famine, or nakedness, or danger, or sword? As it is written,

For your sake we are being killed all the day long;
we are regarded as sheep to be slaughtered.

No, in all these things we are more than conquerors through him who loved us. For I am sure that neither death nor life, nor angels nor rulers, nor things present nor things to come, nor powers, nor height nor depth, nor anything else in all creation, will be able to separate us from the love of God in Christ Jesus our Lord” (Romans 8:31-39).

God’s Word became flesh to seek and save the lost, the littlest, the least, the last, and the dead. Jesus was a friend of prostitutes and lepers, tax collectors and sinners. The religious establishment accused him of gluttony, drunkenness, loose morals, encouraging sin, and blasphemy. But, He brushed all their accusations aside in order to fulfill His Father’s will. Jesus is God’s “yes” (2 Cor 1:20) to a world that can only say “no” to people who are deemed to be disappointments, failures, and unlovable. 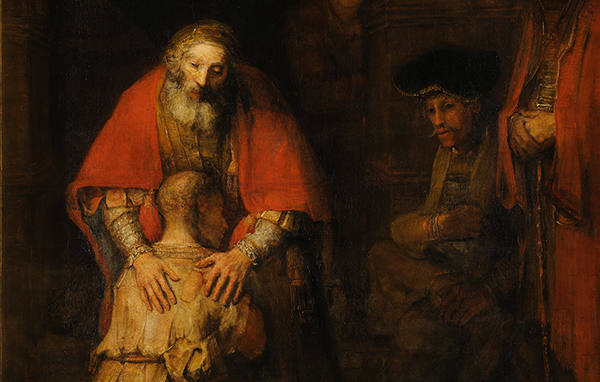 Nothing can separate us from the love of God in Jesus Christ. And every time we start to believe again that we have disappointed God, that we will never be able to do anything to make up for what we have done, we look at the cross; at Jesus nailed to the cursed tree, and there is our evidence, because “God evidences his love toward us in that while we were yet sinners, Christ died for us” (Romans 5:8).

God isn’t angry with us and His anger toward sin has been swallowed up by His love for us, Christ Jesus dead and risen.