Finding God’s Promise in His Law 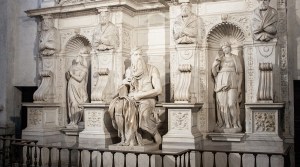 The Psalmist kicks off the whole book in chapter one by saying, “but his delight is in the law of the LORD, and on his law, he meditates day and night.”

Delight in the law—consider that, let it sink in for a moment. Yeah, I hate the law, it keeps telling me not to do all the fun stuff that I want to do.

We Lutheran Christians confess that “the law always accuses!” We even say it in Latin, so you know that it must be true: “Lex Semper Accusat.” Now, unless the Psalmist is some sort of masochist, how could he say that he delights in the law? After all, it always accuses.

Well, there is the easy way out, and we know that the Hebrew word “Torah,” which is used here, means “law,” but it also means “teaching” or “instruction.” So it could be just as easily translated, “but his delight is in the instruction of the Lord and on His teachings, he meditates day and night.” This is more palatable to me, and may be viable, but what about that common translation that uses the word “law”? Is there room for rejoicing in the law?

There is what I like to call, “the back side of the law,” for even as there are threats and condemnation in the law, there is also promise in each of the commandments.

Let’s look at it. The other nine occur only because the first commandment is violated. “You shall have no gods before me.” The Hebrew is fun on this one because it reads, “No gods in my face.” This is the first sin; we made ourselves the idol in our life, and we will continue to serve ourselves first until we die and this one sin leads us straight into the flames of hell.

So what’s the back side? What’s the promise? We shall not have other gods, but we do have the one, true God—the promise of a God for us. Don’t discount those words, for us, because He isn’t against us, but He is for us.

Jesus Christ, the Lamb of God who takes away the sins of the world, has taken away your sins and paid for them on the cross. His life blood, the sacrifice of atonement was made for you; His sacrifice was offered up so that your life wouldn’t be. You shall have no other God’s in His face, but you have His face turned toward you in mercy, compassion, and forgiveness.

You shall not misuse His name. You have His name, the name that He placed on you in the waters of Holy Baptism. You have been named into His name in those baptismal waters. There washed, made pure, perfect in the sight of God, your name is now His and His is yours. Furthermore, His name is given you for right use, for prayer, praise, and thanksgiving. He is an ever present help in times of need.

“You shall honor the Sabbath Day and keep it holy.” Every day in Christ is a day of rest. He calls on us to lay down our burdens and to rest in the shadow of the cross. We no longer need to feel compelled to try to earn God’s favor, for it is given to us freely. St. Paul says in Ephesians 2:8-9, “For by grace you have been saved through faith. And this is not your own doing; it is the gift of God, not a result of works so that no one may boast.” Grace, God’s unmerited favor, it is yours, so relax and rest in that promise.

“You shall honor your father and mother.” With this, we recognize that this also means to honor all who are in authority over us. I miss my father something terrible, how I wish that he were alive so that I could honor him. The gift of a good parent or parents is a wonderful gift. We also look to those whom God established to keep peace in the world. In this is the promise of family and that there are authorities who are invested in keeping order in society (no matter how they may fail).

“You shall not murder.” We are called in this is not only to not kill others, but also to not hate them. We’re called to protect each other. In this is the promise of life for you and, God willing, your Christian neighbor will defend you from violence, too.

“You shall not commit Adultery.” Pornography everywhere and promiscuity is abundant. Yet there is promise in the fidelity of a spouse in this. The love of a spouse is a marvelous thing. Sex is not forbidden in this, but it is a gift, God blesses it in the bonds of matrimony.

The gift of not being slandered or defamed goes along with, “You shall not bear false witness.” As we protect the reputation of others, they are called to defend ours.

“You shall not covet,” in the ninth and tenth commandments also lends to the guarantee to private property, but also, it leads us into a life of contentment. How little of our world is contented with what it already has?

You will never merit God’s favor in your striving to keep any of these laws, and if you think that you can keep them, you’re mistaken. No one is saved by the law, but as mentioned in the first commandment, you have a God, who is for you and not against you. He is not looking for a reason to punish you. Instead He sent His only begotten Son, who fulfilled all of God’s law perfectly, to be punished for you. Jesus Christ has drunk to the dregs all of God’s wrath and was raised from the dead in order that you may have eternal life with Him in heaven.

The promise we find in God’s law is fulfilled in Christ Jesus. Place your hope in Him. In Christ we see that God is a kind and loving Father, One who blesses you even in ways in which you are never aware. Feel free to call on Him at any time, He is always present and always FOR YOU.