When I was a very young lad my family took a summer vacation to the Heartland. We were dropping my oldest brother off to work at a farm of some family friends in Nebraska for the summer and dad turned it into a family vacation. I recall one afternoon walking the farm with my dad and the farmer when we came upon this ditch. Being a bit bored I decided to jump it. Well I didn’t quite make it to the other side and wound up in the middle of the ditch waste high in… well… waste! Yep, it was a sewer ditch. I was promptly brought to the front of the house, hosed off, told to strip off, and go inside to take a bath.

This story illustrates for me our calling as disciples in this world; a calling that entails being waste high (maybe neck high is more appropriate) in the cesspool of the world, which is illustrated in an interesting little gem tucked away in Luke 14. In vv. 34-35 Jesus states the following:

“Salt is good, but if salt has lost its taste, how shall its saltiness be restored? It is of no use either for the soil or for the manure pile. It is thrown away. He who has ears to hear, let him hear.”

Now we are familiar with Jesus using “salt” as a metaphor for being disciples in the world. In Matthew 5 Jesus talks about Christians being the “salt of the world.” And a condensed version of this is found in Mark 9. Yet, Luke is the only gospel that mentions manure. Why? Some scholars believe that when Jesus references manure and salt that he is speaking about the ancient practice of salting animal feces that were then used as fuel for ovens. Why would they salt the manure? The reason is chemical in nature. The sodium in the salt when combined with the nitrates in the manure resulted in a fire that burned hotter and brighter. When the cooking was done, the left over salt was scraped out of the oven and thrown on the ground as it was no longer useful as a cooking agent.

One way in which we can look at this text is to see our call to discipleship (especially since these verses are tagged at the end of a section of Jesus’ teaching on the cost of discipleship) as being agents that burn bright in our crappy world. Yet, what does it mean to burn bright? Jesus provides the answer for us in Luke 14:27 when he talks about, “bearing our own crosses.” Make no mistake burning bright is not a theology of glory; rather it is a theology of the cross.

In reflecting upon Jesus’ words here I am struck by the fact that Jesus spoke these words pre-crucifixion, which makes me wonder what that first audience thought when Jesus talked about them having to bear their own cross in following him. Jesus had spoken already about cross-bearing in chapter nine (v. 23). What is interesting is that in the prior verse Jesus speaks about his upcoming death (v.22) and then he speaks about it again in v. 44. Yet in both instances Jesus never speaks specifically about dying on a cross. One wonders then if Jesus is intimating such a thing when he calls them to take up their cross in v. 23.

But let’s leave that all aside for a moment and think again about how those first hearers might have reacted to the idea of carrying their own cross. They understood what the cross was all about. They knew that the Romans used them as warning signs on the sides of the road to other potential thieves and political insurrectionists. Warning signs that they too could end up like the guy hanging dead on that stick with birds of prey picking chunks of meat off of their bodies. They understood that it was a shameful way to die. They most likely had seen other prisoners paraded through the streets, as a warning show of Roman force, what it meant to go the way of the cross. If you were looking to gain disciples it seems like a pep talk should not include the idea of bearing a cross in order to follow the Rabbi. I can’t imagine that many people would want to walk in that path.

Yet, we don’t read the gospel of Luke like those first hearers. In fact I don’t think we are meant to read Luke that way. I don’t even think Luke’s readers were meant to read Luke in that way, because Luke includes the bloody execution of Jesus on the cross. I believe we were meant to interpret Jesus’ words concerning the bearing of our own crosses through the bearing of His. Does that lessen the impact of the nature of the cross? Well, yes and no. No, because being disciples in a crappy world means that we will face humiliation, persecution, and possibly martyrdom for Christ. Yes, because when we understand the nature of the crosses we bear in light of the cross that Jesus bore there really is no comparison. 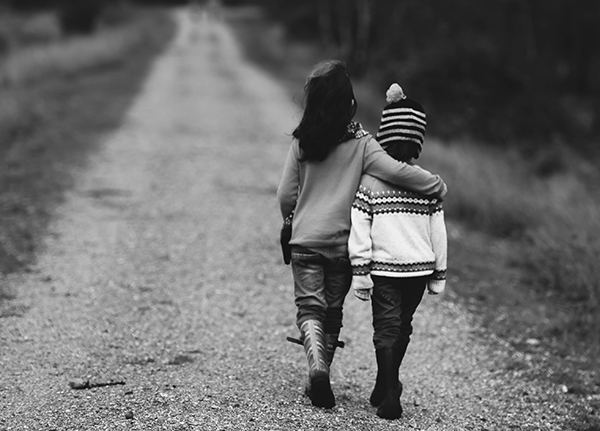 He wasn’t just humiliated and persecuted. He wasn’t some martyr for his cause. His death is eternally significant for us because it was God dying there on the cross for us. And he didn’t just die in the muck and mire of the sewage pit of the world; rather he took that muck and mire upon himself in the taking up of his own cross. It reminds me of the film Shawshank Redemption where the lead character, Andy Dufresne, crawls through the sewage pipe of the prison coming out, in the words of the narrator, “clean on the other side.” Yet, in our redemption story it is Christ who crawls through the crap and we are the ones who become clean in the process. We are cleansed in the waters of baptism, a baptism which Paul tells us is intimately connected to the crucifixion and resurrection of Jesus.