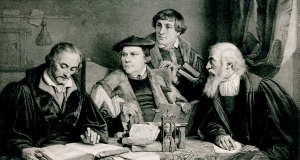 It sounds like the set-up to a joke, but the punch line is true. What do you get when you combine an outlaw Bible professor, a runaway nun, and a dilapidated Augustinian monastery? The answer is the first Protestant parsonage. The Black Cloister, known today as Luther Haus, was built in 1504 with the support of the Elector as a monastery to house forty mendicant monks in the village of Wittenberg. Martin Luther arrived there in 1511 to serve on the faculty of the newly established university and remained there until his death in 1546.

As Luther’s efforts at reform began to build, so did the vacancies in monasteries and convents across Europe as monks and nuns motivated by evangelical teaching left their orders for other vocations and opportunities, including marriage. By the time Luther returned to the Black Cloister from Wartburg in 1522, only one other monk remained. A treatise on The Estate of Marriage from that same year reflects Luther’s maturing thought on the vocation of marriage and the rearing of children with his typical biting humor:

Along comes the clever harlot, namely natural reason, looks at married life, turns up her nose, and says: Why must I rock the baby, wash its diapers, change its bed, smell its odor, heal its rash, take care of this and take care of that, do this and do that? It is better to remain single and live a quiet and carefree life. I will become a priest or a nun and tell my children to do the same. But what does the Christian faith say? The father opens his eyes, looks at these lowly, distasteful and despised things and knows that they are adorned with divine approval as with the most precious gold and silver. God, with his angels and creatures, will smile―not because diapers are washed, but because it is done in faith.[1]

The very next year, Luther found himself assisting in the clandestine rescue of twelve Cistercian nuns from the cloister at Nimbschen. One of these nuns, a fiercely independent and intelligent young woman, would become his wife to both of their surprise. On June 13, 1525, Martin Luther and Katherine von Bora were married in a private ceremony at the Black Cloister followed by a public ceremony two weeks later with friends and family in attendance. Bainton remarks, “The Luther who got married in order to testify to his faith actually founded a home and did more than any other person to determine the tone of German domestic relations for the next four centuries.”[2]

On their wedding night, an unexpected knock on the door came late in the evening after the guests had departed. It was Luther’s former colleague-turned-adversary, Andreas Karlstadt, seeking refuge from the Peasant’s War. Karlstadt was welcomed and remained for several weeks free of charge. When Johann Agricola arrived back in Wittenberg to teach, Luther invited him and his wife, Elsa, to stay with them until they settled in. The Agricola’s had nine children and stayed for several months. It would take Katherine a while to get used to such interruptions and inconveniences, but it would become the norm rather than the exception in their crowded house.

The Mistress of Wittenberg

While Luther receives most of the historical attention, it was his bride that bore the brunt of turning the old monastery into a home. Nestingen notes, “The fact that Katherine Von Bora is remembered by her family name, not simply as Mrs. Martin Luther, solidly indicates the standing that she achieved, not only with her husband, but in the Lutheran Reformation.”[3] Katherine not only managed the home as a loving wife and mother to their six children, but she also became an entrepreneur that helped sustain and feed her ever-growing household. She managed a garden, orchard, pig farm, fish pond, and secured the monastic license to brew beer at the Black Cloister. She used milk from her cows to churn butter and make cheese. Whatever was not used to support their home was taken to the market to sell or barter for other needful things. As their family grew, she was able to hire additional staff, which she personally supervised.

All of this was necessary, in part, because Luther’s university salary was meager (he received little to no royalties on his published writings). Additionally, he was generous to a fault―always giving away their property to others who had need. While their marriage and home was a happy one, it was not without difficulties. Like many couples to this day, their quarreling often concerned money, or the lack thereof. In a letter to a friend, Luther states that he had intended to send a vase to him as a wedding present, but Katie had hid it from him. Katherine’s hard work earned her several pet names from her husband: Katie, my rib, Selbander (better-half), and Lord Kate, Mistress of the Pigsty. When she became too domineering, Luther would offer a play on words for her name by calling her Kette, which means chain in German.

Luther suffered with periodic bouts of depression. Like a modern day psychotherapist, Katherine found creative ways to draw her husband out. On one such occasion, she appeared before his study door wearing a black mourning dress.

“It is true,” she continued. “God must have died, or Doctor Luther would not be so sorrowful.”

Katherine became known throughout the region for her medicinal skills in treating common ailments. This proved essential, because at one time or another, Luther suffered from gout, insomnia, hemorrhoids, constipation, stones, dizziness, and ringing in the ears.[4] Luther once addressed a letter to his wife, “Housewife, Katherine Luther, Doctress, and whatever else she may be at Wittenberg.” Their youngest son, Paul, who became a medical doctor, said his mother was half one. 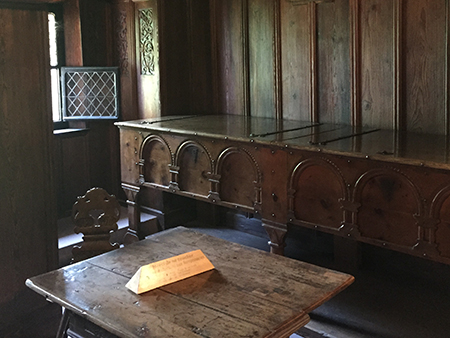 A Table for Talking

Frederick the Wise gifted the Black Cloister to the Luther family in 1532. By this time, the home had been dubbed “God’s Inn.”  Beyond their own children, they took in several more orphaned children from family members. University students also regularly boarded at the Black Cloister. Some were able to pay their rent, but many lived off the Luther’s generosity. It is estimated that the Luther’s housed up to twenty-six people at various times.

Visitors looked at the Black Cloister as a Saxon hotel, while relatives and friends dropped in regularly, often at mealtime. “The world is forever grateful to the students who had the foresight to take up pen,” Maier writes, “as well as fork, to record the master’s words as he presided at the table.”[5] Luther’s wry humor is known to anyone who has read his works, particularly the thousands of quips his students wrote down while dining with their beloved teacher. Eventually these notes were catalogued and published as Martin Luther’s Table Talk, revealing the reformer’s passion and humor, which to his credit, withstands the passing of time. Maier believes it was Luther’s capacity to see the funny side of life that helped support the man in the face of the enormous challenges in reforming an apparently unreformable church.