Christmas is Bigger on the Inside

What do the TARDIS, Mary Poppin’s purse, Hermione Granger’s backpack, Platform 9 ¾, Bilbo’s home at Bag End, a good book, and the Wardrobe into Narnia all have in common with each other?

“It’s bigger on the inside!”

Countless books, movies, and television shows have used this inviting, illustrative idea to awaken the imagination and fill the reader with wonder, beauty, and joy. Many artists, authors, and directors have followed C.S. Lewis in using this idea not only to great storytelling effect, but also to point to the greatest story of all time: the Gospel.

“It’s bigger on the inside” is not only an evocative literary device, it is also a phrase heavy laden with Good News found in the true story of Christianity, especially at Christmas. The God who is bigger than all things in heaven and on earth is born inside His own creation as a small child. The Lord who created the earth and formed the heavens becomes a creature in the form and likeness of our humanity. The Lord of all is born as a servant of all.

As the prophet Micah foretold, the little town of Bethlehem became the beachhead of God’s gracious, divine invasion in Jesus.

But you, O Bethlehem Ephrathah,
who are too little to be among the clans of Judah,
from you shall come forth for me
one who is to be ruler in Israel,
whose coming forth is from of old,
from ancient days.

And before the prophet Micah and Bethlehem, there was the tabernacle and the temple. In many ways, the tabernacle, and later the temple, was bigger on the inside. For between the ornate curtains and gilded walls, the Lord promised to dwell with His people, to share His holiness with them, and to atone for their sin by the shedding of blood. The Glory of the Lord dwelled in the Holy of Holies. The Lord of Sabaoth sat between the cherubim in grace, mercy, and peace for His people.

Before the Tabernacle and Temple there was God promised Abraham and Sarah. Though they were aged, and Sarah was barren, and Abraham had no heir, the Lord promised that from Abraham’s offspring all nations on earth would be blessed.

“Look toward heaven, and number the stars, if you are able to number them.” Then he said to him, “So shall your offspring be.” And he believed the Lord, and he counted it to him as righteousness.” 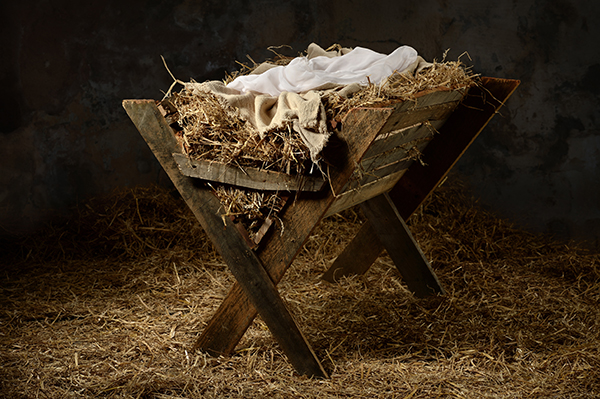 Sarah’s womb, like the tabernacle and temple, was bigger on the inside. Through Isaac, God’s promise to Abraham, Sarah, and all people would be fulfilled.

And before Abraham and Sarah there was Adam and Eve. The Lord made a promise to Adam and Eve and all creation in the form of a curse to Satan:

Though Eve was named the mother of all living, she was not the fulfillment of this promise. The Lord’s promise finally came to be in the womb of the Virgin Mary. The Virgin’s womb was bigger on the inside. As The Genie says in Disney’s Aladdin… Phenomenal cosmic power—ity bity living space.

The Ancient of Days foretold by Micah was born for us “in the days of Herod the king” (Matt 2). The Lord who sat between the cherubim rested in the arms of the Mother of God. Abraham’s offspring is Abraham’s Lord and the Savior of the nations.

Eve’s hope and ours is realized in the birth of this second Adam, born to overcome sin and Satan which overcame the first Adam. The Creator of the stars of night is born of woman, and laid in a manger that was also bigger on the inside.

“Yes,” said the Lord Diggory. “Its inside is bigger than its outside.”

“Yes,” said Queen Lucy. “In our world too, a stable once had something inside it that was bigger than our whole world.”

The One who transcends time and space is born, not in a galaxy far, far away but in the days of Caesar Augustus and Quirinius—for you. Jesus is crucified under Pontius Pilate—for you. And Jesus’ tomb was also bigger on the inside; big enough to bury all your sin and death forever.

So, this Christmas, come, further up and further into Jesus’ stable, to His altar, to see in this Child of Bethlehem, the Lamb who shed His blood to set you free. No matter how big our sin and death seem to be, there’s more than enough room in the manger, the cross, and the tomb for all of it. For you.

A blessed bigger-on-the-inside-Christmas to you.

O Jesus Christ, Thy manger is
My paradise at which my soul reclineth.
For there, O Lord, doth lie the Word
Made flesh for us; herein Thy grace forthshineth.