A Bridegroom of Blood 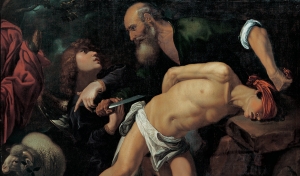 At a lodging place on the way the Lord met him and sought to put him to death. Then Zipporah took a flint and cut off her son’s foreskin and touched Moses’ feet with it and said, “Surely you are a bridegroom of blood to me!” So he let him alone. It was then that she said, “A bridegroom of blood,” because of the circumcision. —Ex 4:24-26

It was an arranged marriage. The arrangement had been made many millennia ago, the Father had arranged for His Son to be your Bridegroom of blood, to redeem you from your sins with His blood, to sanctify you in the washing of the water and the word, to bathe you in the blood of the Lamb, to robe you in His righteousness and to rejoice in you as the Bridegroom rejoices in His bride. The arrangement was made with Abraham when God claimed for Himself all of his being, and put the seal of His promise upon the most personal member of his anatomy. It was a seal that dedicated his descendants to God with their very own blood in a painful operation that would cause a mother to squirm.

Such a mother was Zipporah. Her father was the priest of Midian, a faithful man who knew nothing of circumcision, though he, like Melchizedek and Balaam, knew the God of Abraham, the patriarch of her husband Moses. It was when Abraham had tried to take matters into his own hands and bring about the fulfillment of God’s promise with Sarah’s handmaiden that God instituted circumcision. No, it would not be through the slave woman, but through the woman of promise. And He would seal His promise, an oath sealed with an Old Testament handshake, under Abraham’s thigh, as it were. It was a covenant not made with Abraham alone, but his descendants, too. They would all be given the seal that would mark our Bridegroom of Blood.

So “A bridegroom of blood,” is what Zipporah would call Moses when his life would demand the blood of their son. It was while lodging on their way to free the children of Abraham from the land of Egypt, and Moses had not bothered to seal his son that God sought his life for the matter. There could be no obedience of faith where the seal of the promise is spurned, where little ones would be taught that such a thing does not matter. Suffocating, sweating, and shaking uncontrollably as if drowning under the weight of a millstone, God’s lawgiver would die by the hand of God for neglecting the promise that would save him from death’s sting.

Only now did Zipporah understand how important it was, the seal of the promise, the familial brand. Only then would she be convinced to cut, to mutilate the manhood of her son in order to redeem his father, her husband. For this she would call him her “bridegroom of blood.” It was marriage that cost more than the usual dowry of gold or silver. Only the blood of man could atone for the sins of man, but it would be the blood of God that would sanctify His bride in the washing of the water with the word that she might be clothed in His robes of righteousness, robes whiter than snow.

And at the end of eight days, when he was circumcised, he was called Jesus, the name given by the angel before he was conceived in the womb. —Luke 2:21

And so our Bridegroom came to pay our dowry and pledge His betrothal with blood on the 8th day in accordance with the covenant of promise that the New Year would be commemorated with that which would bring in the new era of the New Testament, the blood of Christ shed for you who would be His bride. With blood He pledged, and with His life blood He paid that our circumcision would not be with hands, but baptized into Him our body of flesh would slough off in a bath of Lamb’s blood to be buried. And we in faith, believing that promise sealed in His blood, would rise to new life in Him whom God raised from the dead, our Bridegroom of Blood, Jesus Who would save us from our sins.